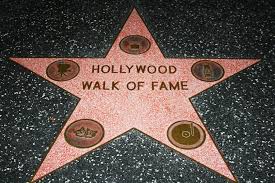 Earlier this month, I read in a Gawker article that Bill Cosby’s star on the Hollywood Walk of Fame was defiled.   This got me wondering if there are other people who have stars on the Walk of Fame who have been accused of crimes.  So I went to Wikipedia’s list to see if I could glean anything.  It turns out that there are far too many Hollywood stars than I care to read about so I decided to do some data scraping and analysis.

First I had to get all the names from the Wikipedia webpage.  I omitted three entries:

After taking out these three, I was left with stars that were assigned the five main categories: Live Performance, Motion Pictures, Radio, Recording, and Television.

I then created a list of the Wikipedia links for each star on the Hollywood Walk of Fame.  After that, I scraped and cleaned the text from each Star’s Wikipedia page.  Lastly, I used regular expressions to learn about word frequencies for words dealing with crime, which I have visualized below.  Not surprisingly, these distributions were all right-skewed.

Disclaimer: I am just looking at word frequencies in Wikipedia pages.   If someone’s wikipedia page includes the word “murder” several times, that could indicate that they portrayed someone in a film that dealt with murder (example: Angela Landsbury), that they are anti-violence advocates, or some other explanation.

I looked into the root-word “accuse” and “controversy”, and plotted histrograms of the number of times each of these words or their variants in included in a Wikipedia profile for each of the stars on the Walk of Fame.

Here we can see that we have right-skewed distributions of both the number of times that “alleged” and “controversy” showed up in Wiki pages.

I decided to look into who had 5 or more mentions of alleged.  Here’s who popped up:

Here are the stars who had 5 or more mentions of controversy:

I looked at several different root words relating to legal proceedings, but let’s focus on sentenced and convicted.

Here are the stars who had the word sentenced appear at least 3 times in their Wikipedia page:

Here are the stars who had the word convicted appear at least twice:

When I was playing around with these data I came up with a few questions that I didn’t get around to:

Knowing how many times the word “convicted” is used in a Wikipedia page is an imperfect measurement how whether or not a person was actually convicted of a crime.  In other words, my gut is telling me that there is low specificity and probably also low sensitivity.  However, this exercise did bring some interesting cases to my attention.  We have a few people who are included in more than one list.  In particular, Lizabeth Scott has a fascinating story that seems like it could have been the basis for the film LA Confidential.  I also got to practice my scraping skills and work on some basic text analysis.  If you want to see how I did this analysis, or perhaps add to what I did, my RStudio .Rmd file is up on GitHub.